What Writing Murder Mysteries Taught Me about Life

A few years ago, I was on a radio program. During the interview, the topic of my husband came up. The lead host, a long-time fan, announced the interesting fact that my husband of thirty years has never read any of my best-selling murder mysteries. After having twenty-seven novels published, my husband has yet to read a single one.

New to the show, the other host, who hadn’t had a chance to read any of my books, was shocked—as many people are.

“It’s okay,” I said with a shrug. “It used to bother me, but it doesn’t anymore. My husband reads non-fiction and is supportive of my writing in every other way. He doesn’t have to read my books.”

I was surprised when across the table, this co-host sighed with relief. “Me, too. I don’t like reading fiction. I prefer non-fiction.”

By the end of the show, this co-host asked for an autographed copy of my new release and promised to read it. If he doesn’t, that’s okay.

I wasn’t always so laid back. Ironically, during my career of writing murder mysteries where the primary goal is end someone’s life, I have learned some things about life.

When I was a college student, studying literature, I remember, while listening to professors declared, “The whale in Herman Melville’s Moby Dick symbolizes …”, thinking:

“How do you know that was what Moby Dick is a symbol of? Did Herman Melville say that is what Moby Dick symbolizes? Maybe he just wanted to write a thrilling book about a big white whale and Moby Dick doesn’t mean anything?”

As an author who has read reviews and emails from reviewers and readers, I have concluded that I was right.

During the course of my writing career, in speaking and corresponding with readers, reviewers, and writers from diverse backgrounds, I have learned that every single person has different likes, dislikes, beliefs in sex, politics, religions, and worldviews.

Therefore, as an author, there is no way possible to write a book that’s going to please every single reviewer and reader. (Heck! I can’t even write a book that will entice my husband to read it!) Nor, is it possible to not offend someone reading something between the lines—even if that “message” is only in the reader’s mind.

A while back one reader posted a two-star review for Open Season for Murder, the tenth Mac Faraday Mystery, because I had named a minor character Corey Haim. She found it offensive that I had used the name of an 80’s former teen idol who had tragically died of a drug overdose.

“What really got to me in this book though was that one of the lesser characters was named for a deceased Canadian actor, Corey Haim, who died in 2010 of a possible accidental drug overdose. Seriously?? Fine, use the name Corey or Haim but to link the two together? No, I wasn’t a fan of the young man but I found the use of his name offensive.”

My first response? To google “Corey Haim” to find out who she was talking about. I had never heard of this actor. Nor, had I ever seen any of his movies. Also, I discovered on the Internet that he died of natural causes. While the actor this reader was referring to had a history of drug addiction—he did not die of a drug overdose.

The minor character by that name in Open Season for Murder bore no resemblance to the actor. He was not an actor. He was not a drug addict. He had no emotional issues at all. This minor character was positive in every way shape and form. He was a doctor from a small West Virginia town working to build a free clinic for his neighbors. He was a devoted friend and committed fiancé—which begs the question—how is using the name of someone who had lived a tragic life for a positive character offensive?

The use of the name Corey Haim—pulled out of the air—was completely coincidental. However, based on whatever her experiences may have been, this reader read something between the lines that was never there.

Studies have proven that when it comes to siblings, each child is born into a different family. Think about it. The first-born is born as an only child. The second child is born into an established family. The last child may be born into a big family. In each case, the circumstances—family dynamics—are different. Therefore, each comes away with different experiences and impressions of those experiences. How many of us know of siblings in which one remembers their childhood as something from Nightmare on Elm Street, while one or more saw their family as role models for The Waltons?

Is it really any wonder that authors, reviewers, or readers don’t see the same book in the same manner? Are those who read “messages” between the lines (like the reader offended by the name Corey Haim) that I did not intend (since I had never heard of Corey Haim) wrong or stupid or judgmental? Who’s right? Who’s wrong?

Not me. My only intention is to write thrilling mysteries with plenty of twists and turns. As a human being and author, I respect those readers whose strong beliefs differ from mine. I only ask that they reciprocate with their respect.

After all, how else can billions of people, each one different in their own way, get along on this planet we call Earth if we don’t respect each one’s differences?

So, when it comes to people, whether they be readers or reviewers or my most devoted fan who still won’t read my murder mysteries—who disagree or dislike my books or are offended by the name of a minor character or what they perceive to be my worldview, I say, with a shrug of my shoulders, “That’s okay.”

That’s what writing about murder has taught me about life.

Enter For Your Chance To Win Here!

“The plot was original, fresh and fast paced in spite of the “traditional elements” employed which can normally be found in any other thriller of this genre. The USP of this story would be its unpredictability. When you think you have it all guessed up, the plot would change its course keeping you hooked. There were a lot of suspense twists and turns that kept the momentum up. Needless to say, the writing was simply perfect. One thing that writer needs to be lauded for is the humor she inculcated in the book. Minus those humorous parts, the book would have been one serious read.” – Reviewer: Book and Ink 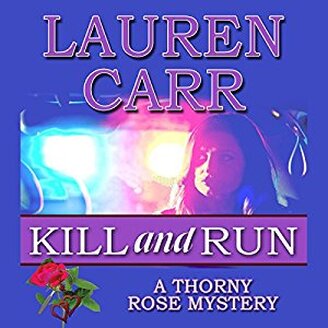 Five women with seemingly nothing in common are found brutally murdered in a townhome outside Washington, DC. Among the many questions surrounding the massacre is what had brought these apparent strangers together only to be killed.

Taking on his first official murder case, Lieutenant Murphy Thornton, USN, believes that if he can uncover the thread connecting the victims, then he can find their murderer.

The case takes an unexpected turn when Murphy discovers that one of the victims has a connection to his stepmother, Homicide Detective Cameron Gates. One wintry night, over a dozen years before, her first husband, a Pennsylvania State trooper, had been run down while working a night shift on the turnpike.

In this first installment of the Thorny Rose Mysteries, the Lovers in Crime join newlyweds Murphy Thornton and Jessica Faraday to shift through a web of lies and cover-ups. Together, can the detectives of the Thorny Rose uncover the truth without falling victim to a cunning killer?

“Mysteries, murder, danger, and memories that threatens their lives keeps the action and suspense at a high level and even when the answers are found, it left me wanting more.” – Review by Sherry Fundin of Fundinmental

After ten months of marital bliss, Jessica Faraday and Murphy Thornton are still discovering and adjusting to their life together. Settled in their new home, everything appears to be perfect … except in the middle of the night when, in the darkest shadows of her subconscious, a deep secret from Jessica’s past creeps to the surface to make her strike out at Murphy.

When investigative journalist Dallas Walker tells the couple about her latest case, known as the Pine Bridge Massacre, they realize Jessica may have witnessed the murder of a family while visiting family at the winery near-by, and suppressed the memory.

Determined to uncover the truth and find justice for the murder victims, Jessica and Murphy return to the scene of the crime with Dallas Walker, a spunky bull-headed Texan. Can this family reunion bring closure for a community touched by tragedy or will this prickly get-together bring an end to the Thorny Rose couple?
Buy the Book:
Audible ~ Amazon
Add to Goodreads


Murder by Perfection is a wonderful read and a perfect to escape from the challenges of a busy day. Danger, intrigue, humor, and love all take their turn in this tale which will keep you reading into the wee hours.” Review by Marilyn R. Wilson, Olio by Marilyn


Beware: Perfection has a dark side!

Frustrated with their busy schedules, Murphy Thornton and Jessica Faraday attempt to find togetherness by scheduling a weekly date night. The last thing Jessica Faraday expected for her date night was to take a couple’s gourmet cooking course at the Stepford Kitchen Studio, owned by Chef Natalie Stepford―the model of perfection in looks, home, and business.

When Natalie ends up dead and Murphy goes missing, the Thorny Rose detectives must peel back the layers of Natalie Stepford’s life to discover that the pursuit of perfection can be deadly.


Enjoy this latest Thorny Rose Mystery! Coming soon to Audible!
“Wow – this is one INCREDIBLE novel that I could not put down. It had me  on the edge of my seat and I can honestly say that I never saw the end coming. It was full of suspense, action but also humour (done in a way  that only Lauren can accomplish).” – 5-Star Review of THE NUTCRACKER CONSPIRACY by Working Mommy Journal 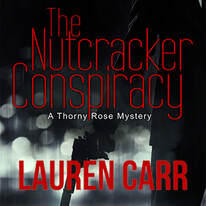 Three years ago, the nation gasped in horror when the President of the United States barely escaped an assassination attempt that left two dead—the vice president’s wife and the attempted assassin.  Even after numerous investigations proved otherwise, conspiracy theorists argue that the assassin was acting on orders from the CIA, FBI, and every federal agency within a hundred miles of the capital.

Aspiring Author Dean Conway is the last person Lieutenant Commander Murphy Thornton wants to spend his Saturday afternoon when they end up at the same wedding reception table. While their wives tend to bridesmaid duties, Murphy is trapped listening to Dean’s latest work-in-project—completing the manuscript of an investigative journalist who’d disappeared months earlier.

“She was number twelve,” Dean says.

“Twelve witnesses connected to or investigating The Nutcracker shooting have died either in an accident or suicide.”

A popular speaker, Lauren is also the owner of Acorn Book Service, the umbrella under which falls iRead Book Tours. She lives with her husband and two spoiled rotten German Shepherds on a mountain in Harpers Ferry, WV.