Welcome back to Lamon Reviews. Today I have an exciting book to recommend. I read an e-arc of Don’t Look In by Tom Saric. A special thank you to iReadBookTours for the opportunity.

Remember, you can use the giveaway link in the post to enter for your chance to win 1 of 3 signed copy of DON’T LOOK IN by Tom Saric (3 winners) (USA and Canada only) (ends Nov 27)

I have to admit, I don’t like reading prologues. I don’t really know why, other than they occasionally bore me, but frankly, I think I may have changed my opinion on them, because I was hooked into this book from the prologue and the first chapter all the way to the end.

Tom Saric opens the first chapter with a suspenseful character introduction. As you read further into the novel, how this particular situation came about is explained. But this opener was ‘thow you straight into action’ awesome.

The rest of the novel follows suit and did not disappoint. Even the wrap up in the last chapters had me guessing. There were quite a few twists and turns, (which made me read faster) and made this read feel immersive to me. The ending was great as far as being unexpected and as a set up for the next novel in the series.

My favorite characters are Sheila and Herman. Sheila, because I absolutely love people that are able to do just about everything. Another reason I liked her is the authors writing. To me, she is both hyper-capable and everyday relateable, which I like. Herman on the other hand, is the crazy quick-witted hermit, that everyone needs as a neighbor. (I’m not sure anyone likes to waste strong homemade liquor!)

I enjoyed Don’t Look In as it reminded me of the Stillhouse Lake series by Rachel Caine. (My favorite series this year so far.) Particularly, the overall similarity between Gus and Gwen when it comes to doing anything to keep their family safe.

There are a couple very short instances in which it switches to the Killers POV. It is such a stark contrast to reading Gus’ point of view. The first instance I accidentally read it as Gus, but realized and corrected it afterwards.

Try as I might, I can not find anything to dislike about this novel. I even liked bat-crazy Ernie (who reminds me of some people I know.) I think seeing the characters from Gus’ perspective reminds us to not judge so harshly.

I recommend Don’t Look In to all readers that enjoy mystery suspense thrillers . I particularly liked it when I got to later chapters and reading the chilling atmosphere and suspense in the dark. (Cause that’s basically what I did.) The last six chapters, I could not put this book down, and can not wait to get hold of the others in the series. 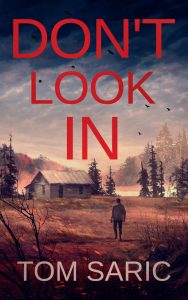 The patients of psychiatrist Gus Young are turning up dead in Tom Saric’s new thriller, DON’T LOOK IN (October 6, 2020; Severn River Publishing), and he is the main suspect.

Gus fled the big city to escape the shame, gossip and glares of his family, friends and colleagues after he tarnished his reputation. He ends up in a small, backwater rural town in Maine where no one will know him and he can start his life over. But someone is out to get him, and is framing him for the murders of his patients.

Wanda Flynn, the sexy town prostitute who is having an illicit affair with the married mayor, is demanding that he leave his wife for her. Her brother has just been released from jail after a ten-year sentence, and is back in town. It was Wanda’s testimony that was pivotal in sealing his conviction. Suddenly she is found dead, shot in the head in front of her apartment, shortly after she had unburdened her secrets, fears and desires to Gus Young. Because of patient-client confidentiality, Gus cannot reveal that she is his client, nor what she revealed to him, even if it will help to solve the murders, or clear his name as a suspect.

Then another patient, Ned, who is suffering from paranoia and is sure he knows the identity of Wanda’s killer, is found dead in his home after he had an altercation with Gus that left him bleeding on the floor. The police find bullets in both victims that match a rare gun, the Lee-Enfield No.4, which has mysteriously vanished from Gus’s basement. And they find Wanda’s turquoise necklace in his possession.

All the evidence point to Gus. He is the prime suspect in the murders, but in order to protect his clients’ confidentiality, even after they are dead, Gust doesn’t reveal information that can prove his —Over— innocence. Gus puts his own life in jeopardy in a desperate effort to clear his name and track down the real killer. When his estranged daughter comes to visit him, her life and the life of his trusted friend Sheila, are in jeopardy from the real killer who wants to do them harm. As a sinister plot unravels, Gus discovers a horrible secret about his past.

Tom Saric, who is a psychiatrist, packs his thriller with quirky characters: the cross-dresser, the married couple who don’t enjoy sex, the psychopath who is a petty criminal, the town sex-worker, and a love interest, the tall beautiful blonde who shares his love of country music and is the first woman to show an interest in him after his messy divorce.

DON’T LOOK IN is the first in a series featuring psychiatrist Gus Young who uses his acuity in understanding the human psyche to solve murders. Fans of the HBO series, In Treatment starring Gabriel Byrne, will relish the character of Gus Young as he solves murders using psychological, not forensic, evidence.

Meet the Author:
Tom Saric, a pseudonym, has been practicing psychiatry for ?? years. He has written several thrillers, including, Indicted, and Compromise. DON’T LOOK IN is the first in a series featuring psychiatrist Gus Young. Saric lives in Canada.

Remember to use the link above to enter the giveaway! Keep up with the author using his social media links.

I hope you enjoyed today’s review of the mystery thriller, Don’t Look In by Tom Saric. This book is absolutely great. I hope this will be your next read. Let me know below in the comments what you think. Will this one be on your TBR list?